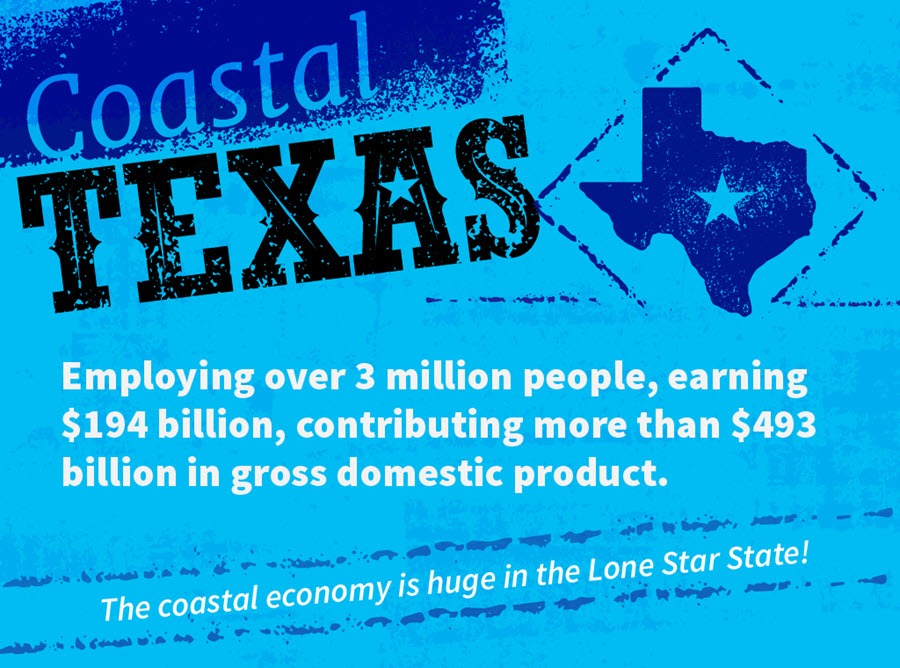 A statewide plan to protect and promote a vibrant and resilient Texas coast that supports and sustains a strong economy and healthy environment for all who live, work, play or otherwise benefit from the natural resources and infrastructure along the Texas coast.

About 6.5 million people with total wages topping $37 billion reside along the Texas coast, as do bustling ports, military installations, 25 percent of the nation’s refining capacity, and most of the nation’s strategic petroleum reserve. Unfortunately, coastal businesses and homes are vulnerable to hurricanes and floods, and its Gulf shoreline is eroding at an average of two feet per year.

From the mouth of the Rio Grande River to the Sabine River, the Texas shoreline is ecologically diverse and biologically productive. Its habitats maintain native plant and animal populations, provide nurseries, nesting and foraging areas for fish and wildlife, and reduce the impacts of coastal hazards.

The Texas coast region plays a key role in the country’s energy security, with Texas leading the nation in energy production, from crude oil and natural gas. Other critical state and national economic generators along the Texas coast include waterborne commerce, military transportation, chemical manufacturing, commercial fishing, recreation, and tourism.

At any given time, there’s over two billion dollars of residential real estate for sale on the Texas coast supporting the Texas tourism industry through second home vacation rentals and local property taxes.

‘The Texas coast, however, is vulnerable to an array of coastal hazards, such as coastal erosion, sea level rise, coastal storm surge, habitat loss and degradation, water quality degradation, and other issues that are putting the environmental and economic health of the coast at risk. In addition, events within the past decade, such as Hurricane Ike and Hurricane Dolly, caused further environmental and economic devastation along the Texas coast and highlighted the urgency for better protection.

As Commissioner of the Texas General Land Office (GLO), George P. Bush recognizes the need for a plan to address the Issues of Concern that negatively impact the coast and to ensure that the state’s coastal communities become more resilient. To support the GLO’s mission to preserve and enhance the state’s coastal natural resources while promoting economic growth, Commissioner Bush directed the development of a Texas Coastal Resiliency Master Plan (Plan). 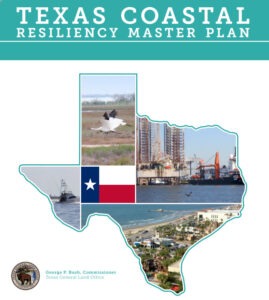 The Plan is founded on the principle of creating resilient coastal communities – the ability of coastal resources and infrastructure to withstand and rebound from natural and human-induced disturbances. Achieving coastal resiliency will reduce the state’s vulnerability to coastal hazards and protect the state’s coastal assets and environments.

The Texas Coastal Resiliency Master Plan is working to protect residents and the economy by safeguarding the coast through marine debris clean up and the restoration of dunes, beaches, wetlands, and oyster reefs.