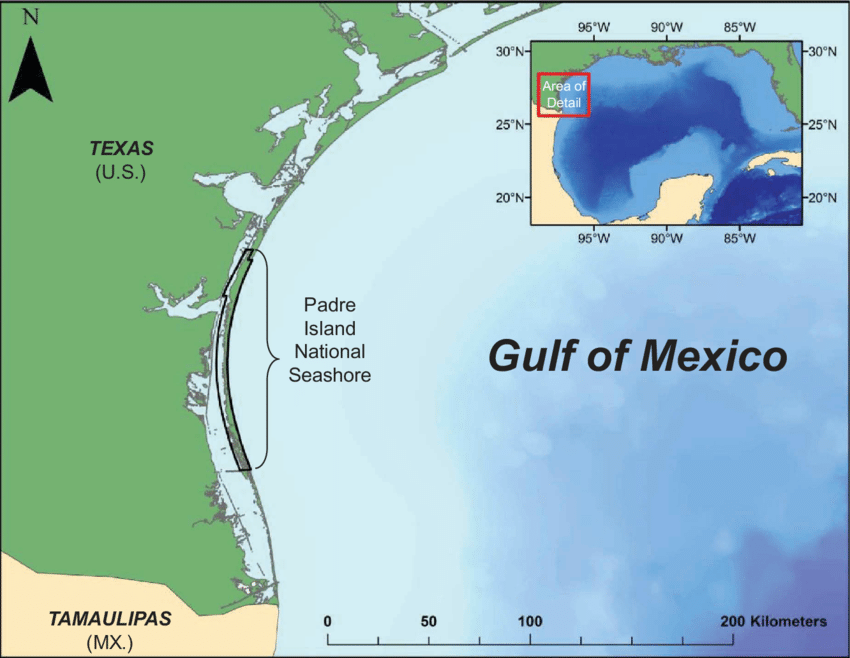 The Longest Stretch of Undeveloped Barrier Island in the World

Padre Island National Seashore separates the Gulf of Mexico from the Laguna Madre, one of a few hypersaline lagoons in the world.  The park protects 66 miles of coastline, dunes, prairies, and wind tidal flats teeming with life.  It is a safe nesting ground for the Kemp’s ridley sea turtle and a haven for over 380 bird species.

The Padre Island National Seashore campgrounds are open year-round. No reservations are accepted, as camping is first-come, first-served. Campers, including beach campers, must have a camping permit, which is available from the kiosks at the entrances of each campground. 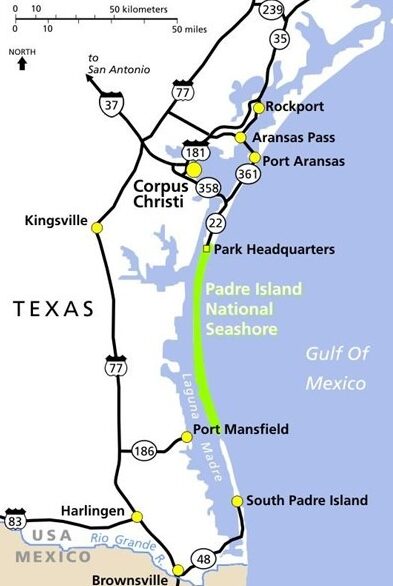 Nowhere is the island more than three miles wide. The island was formed by the slow, ongoing process of sea erosion and deposition.

A large variety of shells have been washed ashore on the island, and other objects from rivers and from the Gulf have been deposited in fine silt and sand on the island. The result is a treasure hunter’s paradise.

Padre Island is a biological wonder with more than six hundred species of plants and wildflowers. A unique species of oily live oak tree (Quercus fusiformis) grows only on the island. Blacktail jackrabbits, ground squirrels, kangaroo rats, coyotes, and eastern moles are among the many animals on Padre.

The Laguna Madre is noted for its astronomical numbers of waterfowl. Herons, ibis, egrets, spoonbills, pelicans, cormorants, ducks, and geese use the island and the lagoons as a sanctuary and breeding ground. In 1991 the island was divided into three distinct areas: north, central, and south.

More than 380 species of birds have been found at Padre Island National Seashore. This is half of all bird species that have been documented in North America!

The national seashore is a fabulous place for birds and bird-lovers because it is located on the Central Flyway, a major migration route on which birds travel during their migration to and from North, Central, and South America. Sandhill cranes, snow geese, redhead ducks, and several other birds fly down from northern nesting habitats to spend the winter in the area.

While visiting Padre Island, you may catch a glimpse of the Black Skimmer grazing the water with its bill, a White-tailed Hawk keeping watch, perched on top of a telephone pole, or hear the song of an Eastern Meadowlark happily celebrating the spring.

The National Seashore protects a variety of habitats that are critical to the health of myriad bird populations. Some habitats, like wind-tidal flats, are extremely fragile and rare, and provide an abundance of food upon which migratory and resident birds depend. Other bird habitats found in the park include beaches, coastal prairies, dunes, grasslands, wetlands, and ponds.

Its range of habitats makes Padre Island an essential stop-over point for migrating and resident birds that are seeking out grounds for rest, food, nesting, and breeding.

The island has been designated as a Globally Important Bird Area by the American Bird Conservancy and a Site of International Importance by the Western Hemisphere Shorebird Reserve Network.

Within the park, there are sixteen threatened and endangered bird species, making Padre Island National Seashore an even more important location to these creatures’ fragile existence. Based on the Texas Colonial Waterbird Survey, bird counts show decreasing numbers of waterbird species on the spoil islands within the park’s boundaries, but participants in the waterbird survey provide varied explanations to suggest why the decrease is occurring. Explanations include habitat loss, disappearance of nesting grounds, marine debris, depletion of food sources, windmills impeding flight, and light pollution affecting migratory patterns.

Padre Island National Seashore is a national park located just outside of Corpus Christi that includes about seventy miles of undeveloped beaches and natural habitat. South Padre Island is a resort community located near Brownsville with numerous hotels, clubs, and souvenir shops. The two destinations are at opposite ends of the long, barrier island named Padre Island and are about one hundred miles apart.